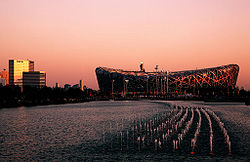 Located at the Olympic Green, the stadium cost US$428 million. The design was awarded to a submission from the Swiss architecture firm Herzog & de Meuron in April 2003 after a bidding process that included 13 final submissions. The design, which originated from the study of Chinese ceramics, implemented steel beams in order to hide supports for the retractable roof; giving the stadium the appearance of a bird's nest. Leading Chinese artist Ai Weiwei was the artistic consultant on the project.[7] The retractable roof was later removed from the design after inspiring the stadium's most recognizable aspect. Ground was broken on 24 December 2003 and the stadium officially opened on 28 June 2008. A shopping mall and a hotel are planned to be constructed to increase use of the stadium, which has had trouble attracting events, football and otherwise, after the Olympics.[8]

In 2001, before Beijing had been awarded the city held a bidding process to select the best arena design. Multiple requirements including the ability for post-Olympics use, a retractable roof, and low maintenance costs, were required of each design.[9] The entry list was narrowed to thirteen final designs.[10]Of the final thirteen, Li Xinggang of China Architecture Design and Research Group (CADG), said after he placed the model of the "nest" proposal at the exhibition hall and saw the rival entries he thought to himself, "We will win this."[9] The model was approved as the top design by a professional panel; however, it was later exhibited for the public. Once again, it was selected as the top design.[9] The "nest scheme" design became official in April 2003.[9] 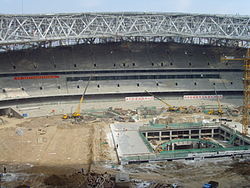 Under construction in September 2007

Why does a Chinese bowl or a Chinese window have this kind of pattern? Maybe the Chinese people like things to appear in this irregular way, but underneath there are very clear rules. The Bird's Nest developed in this way.

Beijing National Stadium (BNS) was a joint venture among architects Jacques Herzog and Pierre de Meuron of Herzog & de Meuron, project architect Stefan Marbach, artist Ai Weiwei, and CADG which was led by chief architect Li Xinggang.[6] During their first meeting in 2003, at Basel, the group decided to do something unlike Herzog and de Meuron had traditionally designed. "China wanted to have something new for this very important stadium," Li stated.[6] In an effort to design a stadium that was "porous" while also being "a collective building, a public vessel",[11] the team studied Chinese ceramics.[12] This line of thought brought the team to the "nest scheme".[11] The stadium consists of two independent structures, standing 50 feet apart:[4] a red concrete seating bowl and the outer steel frame around it.[11]

In an attempt to hide steel supports for the retractable roof, required in the bidding process, the team developed the "random-looking additional steel" to blend the supports into the rest of the stadium.[11] Twenty-four trussed columns encase the inner bowl,[13] each one weighing 1,000 tons.[9] Despite the random appearance of the Stadium, each half is nearly symmetrical. [14] After a collapse of a roof at the Charles de Gaulle Airport,[9] Beijing reviewed all major projects. It was decided to eliminate the retractable roof, the original inspiration for the "nest" design,[9] as well as 9,000 seats from the design.[14] The removal of the elements helped to bring the project under the reduced construction budget of $290 million, from an original $500 million.[9] With the removal of the retractable roof, the building was lightened, which helped it stand up to seismic activity; however, the upper section of the roof was altered to protect fans from weather.[14] Enerpac was granted the contract to perform the stage lifting and lowering of the stadium roof as part of the construction process.[15] Due to the stadium's outward appearance, it was nicknamed "The Bird's Nest". The phrase was first used by Herzog & de Meuron, though the pair still believes "there should be many ways of perceiving a building."[11] The use is a compliment Li explained, "In China, a bird's nest is very expensive, something you eat on special occasions."[9]

Ground was broken, at the Olympic Green,[16] for Beijing National Stadium on 24 December 2003.[17] At its height, 17,000 construction workers worked on the stadium.[18] Portraits of 143 migrant workers at the construction site were featured in the book Workers (Gong Ren) by artist Helen Couchman. On 1 January 2008, The Times reported that 10 workers had died throughout construction; despite denial from the Chinese government.[19] However, in a story the following week, Reuters, with the support of the Chinese government, reported that only two workers had died.[18] All 110,000 tons of steel were made in China. On 14 May 2008 the grass field of 7,811 square meters was laid in 24 hours.[20] The field is a modular turf system by GreenTech ITM. Beijing National Stadium officially opened at a ceremony on 28 June 2008.[21]